I have been the lucky recipient if much excellent hospitality on this trip so far. France has saved the best until last. The few days I have spent in this home in Saint-Jean-de-Luz have been so fine, so memorable, that I am devoting an entire post to describing the experience.

Francis and Irene are the parents of my good friend Maude, whom I have known for 14 years, and parents-in-law to Philippe, my very close friend for 20 years now. Since about 1998 Francis and Irene have visited New York City at Christmas time. At first we shared greetings, then sometimes wine or dinner, in the Greenwich Village neighborhood where I sell Christmas trees. A few years ago the whole family (now with teenaged grandchildren Enzo and Eva, my buddies and interpreters) visited my Vermont home for the holidays. What a party that was!

After successful careers as restaurateurs in Versailles, they retired to Irene’s home town, a beautiful resort on southern France’s Basque Atlantic coast. They transformed an ancient stone farmhouse into a more-than-elegant home, where they have developed the art of living the good life to a high degree. Francis plays Pétanque (similar to Bocce) at a high level, and will even modestly admit to being a former national champion. Deep sea sport fishing is another of his passions, as is food and wine. Irene leads a full life with close friends and relatives nearby, often at her table. She walks a lot, and takes seriously long hikes each week with her group in the nearby Pyrenees. Fresh local bread, seafood, cheeses, vegetables, fruit, meat and wines, all simply and elegantly prepared, grace their table three times each day. Perhaps this all helps to explain why, at an age that many dread reaching, they are full of the joy of living, still in love, and look far younger than their years.

Francis and Irene are gifted hosts, and their home sees many guests. My son Henry was one a few years ago, spending three months learning French. I was very pleased to meet his friend Aldo, a retired hotelier and Francis’ comrade. Now my friend too, Aldo drove me to town in his immaculate VW Rabbit (on a day when we had rabbit for dinner, good for a few laughs) to get parts so that I could repair Irene’s bicycle, the only little bit of a chore I was allowed to perform during my stay. Aldo introduced me around as “Henri’s Papa!”

Pleasant, extended mid-day meals were spent with Irene and Francis, Aldo, and Irene’s friends Dani and Marie Claire. An afternoon excursion to nearby San Sebastian, Spain, with the whole crew, ended in classic style at an upscale restaurant’s outdoor table. The waiter seemed to treat us with special attention and care. A bicycle tourist rolled slowly by eyeing our table. Now I was on the inside looking out, sipping my wine and laughing with my party, not a care in the world.

Some years ago I took an interest in the life of Louis XIV, reading an excellent book about his life and reign (the longest reign in the history of European monarchy), and it was here near the border he was married to Maria Theresa of Spain. Always extra agent in gesture, he ordered the church door walled up after he passed through with his new wife. Irene showed me that walled-up door, much larger than I had imagined. I read in that book how Louis XIV had, next morning, stood at his bedroom window and for an hour threw newly-minted gold francs to the townspeople below. Irene showed me that window.

Next day I went shopping with my hosts. Not to a supermarket. First the busy fish house, where we were well greeted. I can’t remember seeing a more extensive selection or a more beautiful layout. Another warm welcome at the cheese vender, more beauty and variety, history and tradition. And again at the butcher shop, the bakery, the vegetable man, the fruit stand. Each one knew Irene and helped her make the careful choices that form a part of her kitchen magic. Francis and I lugged around a week’s worth of provisions, setting them down only to remove our hats and shake hands with the many locals who seemed delighted to meet Henry’s Papa, the American cyclist.

I thought I would spend two nights here. My friends’ sincere objections kept me here two more. They sent me off with the ingredients for success: bread, cheese, fruit and wine.

My ride this morning was among the best I have had, ever. Three hours to the top of the Venta Liziaerta, sort of like the Lincoln gap, for you Vermonters. I chose this pass because it seemed like the road less travelled. Town gave way to farms and villages, then forest, roadside springs, mountain sheep meadows, and finally a rocky summit. I’m sitting here now in the sun, France spread out below to the north, Basque Spain
to the south. An old stone customs border control hut sits unused, doors bricked over, stone pillars for the old gate still standing close to the narrow road. Hawks circle; the only sound the tinkling of sheep bells as they graze in the meadows below. My belly is full, and my climbing done for the day. I suppose a little wine wouldn’t hurt anything. 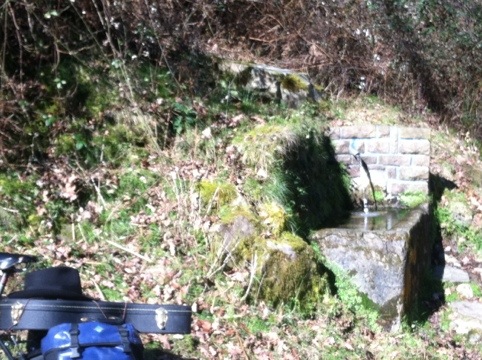