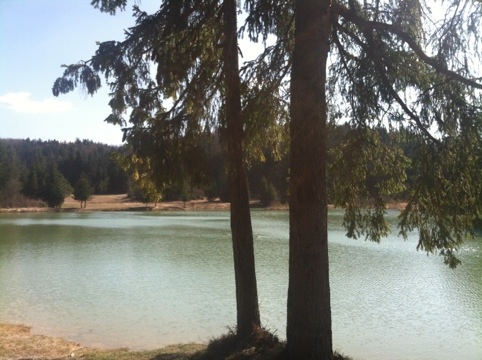 I love Slovenia! It is bicycle paradise to me, hilly and green with smooth roads and little traffic. Mountain passes with impossibly beautiful spruce-rimmed meadows bring me to one idyllic, flat-bottomed valley after another, with tidy villages and towns every few miles. The valleys are surrounded by deep spruce and pine forests with bare, rocky peaks and ridges beyond. It is clean.

An hour from the border I asked to camp in a farmer’s field. As soon as my tent was ready I was offered dinner. Darinka and Darko are retired farmers, now avid gardeners. The soup was a traditional Slovenian recipe, Darinka said; sour kraut and a few white beans in a milky broth with whole cumin, delicious. I was also served a large bowl of raw wild dandelion greens with boiled potatoes; finely chopped salt pork fried in a generous amount of olive oil, poured onto the greens and potatoes, made a rich and tasty dish, with hearty whole-grain bread to wipe the bowl. Darinka and Darko ate theirs out of the same big bowl, lovebirds in their seventies. Apples for dessert. In the morning breakfast, slippers, towels for my shower, and spring water for my bottles were waiting.

Next day was Slovenia’s annual national clean-up day. I thought it was pretty clean already, but groups of people young and old were out rooting cans and bottles, litter and hub caps from the ditches and snow-flattened grass, piling bags by the roadside. There was a celebratory air to the mission. I stopped to talk to several groups and families. Some shouted, “For SLOVENIA!” with proud smiles.

After a windy mountain campsite and a nice ride I stopped at a cafe in Postojna, a quiet town of ten thousand people. I was here to decide. Outside was an intersection. East would lead me, eventually, to Ukraine and Russia, my original plan. South would bring me to Greece and Turkey where, if I can get visas, I can go through “the ‘Stans” (Turkmenistan, Uzbekistan, Tajikistan, Kyrgyzstan), saving a thousand miles and a thousand Siberian mosquito bites. Turkey and the ‘Stans are said to be beautiful, cheap, and friendly (the people, not the government).

Three friendly young men approached, hitting the cafe after running a foot race that morning. One looked, talked and acted so exactly like my dear departed friend Garland English that I had to choke back tears.

They got my story quickly. Excited, they produced a map of Eastern Europe and showed me a back-road route through Slovenia, Croatia, and Serbia to Romania that would put off my decision for a week or two. They drew me a map, a crooked line with town names and important landmarks. Dominik gave me the name and address of a friend thirty kilometers away where I could stay for the night.

I’m following that map into ever more beautiful valleys and forests. A thunder shower sent me into a thick spruce woods where I ate peanuts and inspected the spring flowers and mushrooms, dry under the tall trees.

Dominik’s friend Simon and his dad Stane put me up for two days while I did laundry, ordered some parts for my kit, researched routes, and ate great home made bread with home made butter and preserves, raw milk, garden greens and lots more. I have once again found myself among wonderful people.

These limestone mountains have big caves and lots of history. Simon helped me make sense of recent history, which he and his dad lived through, with maps and pictures on the dining table and much passion in the telling.

Also fascinating to me is the fact that people in this area, Inner Carniola, developed skiing 500 years ago, independently from the Scandinavians. The regional crest features a mustachioed skier with an overcoat and a wide-brimmed Fedora-like hat, scarf streaming behind. My host Stane, long retired, is president of the local tourism association and an amateur historian. He showed me a pair of the old skis, by far the oldest I have ever held.

After lunch Stane brought me hiking. His English came back to him in little bits as he showed me the back country. Here, the back country is full of history. Old castle ruins from the 1400s, when the Turks briefly occupied the area; a Catholic church on a hilltop in the middle of nowhere, still used twice a year; a village of eight houses with only tiny dirt road access and a spring-fed fountain from the middle ages—in fact, if it weren’t for the electric wires and poles, the village would look the same as it did back then. A church in one village—this is all on the same hike, now—was bombed by the Italian Fascists in the war, and was rebuilt, to show those bastards they couldn’t win. But on the inside it was left unfinished, in remembrance of those who died there. Stane knew natural history, too, showing me spring flowers, black squirrels, wild plum trees, a river that disappeared into the ground, and what he regarded as the finest woods in the country. I’m a lucky guy to spend an afternoon in the hills with him. 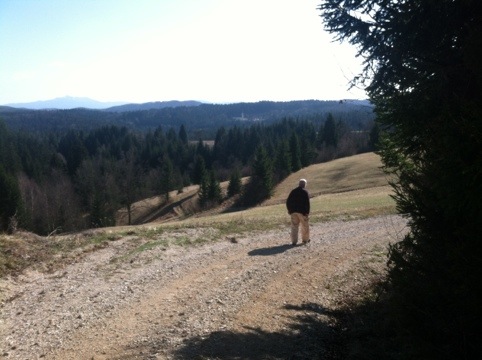 At dinner we were joined by Stane’s other son, daughter-in-law, and four grandchildren. I’m afraid I cranked the kids up before bedtime with mandolin lessons and horseplay. More great, delicious, home grown food, too. Simple ingredients made with love; eggs the kids gathered, wild greens, fried potatoes, and the next-door neighbor’s home made wine.

I’ll leave here the morning, into the hinterlands. (Love that word!) Eastern Croatia and Serbia are said to be even less developed. I’ll keep you posted. 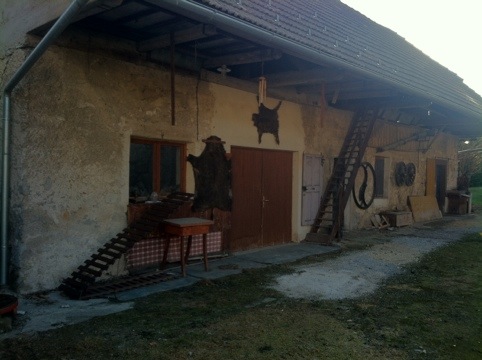