I had both flat valleys and steep mountain passes between the last post, in Doboj, and Belgrade, where I am now. I passed through some incredibly gritty industrial cities in Bosnia; Tuzla stands out. Seems the major industries are nuclear power, scrap metal and smokestacks. I asked a waitress, “How do you like it here?” She said, “Its awful. The people are terrible. I hate it.”

Bijeljina was a bit nicer: 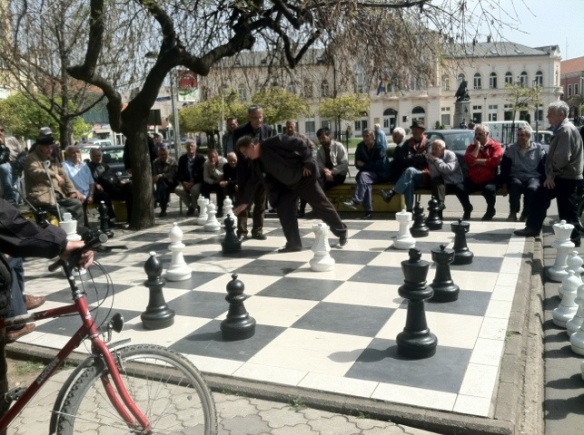 I climbed one pass late in the afternoon, then into evening, trying to get to the east side for a camp with morning sun. I made the top, then climbed on a side road to find privacy. I didn’t choose this spot: 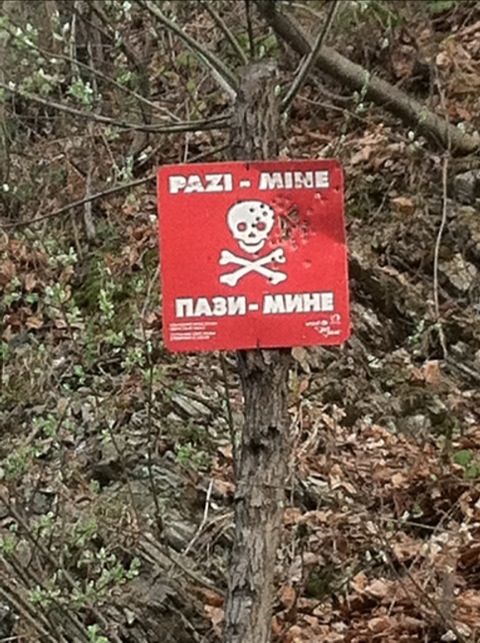 By the time I was satisfied I had pushed into exhaustion, legs trembling as I pulled a windbreaker over my sweat-soaked jersey. I had my dinner in the dark and slept like a hibernating bear.

Next day I should have made it to Serbia. Five miles from the border I made a wrong turn and then, trying to reach the right highway using back roads, I got quite lost by sunset. My camp by a man-made lake was among the most private and beautiful I have enjoyed. It rained, stopping at 8:00AM for long enough for me to pack up and leave.

I found my highway and entered Serbia in a drizzle.

As I go eastward the people I meet look to the west, toward western Europe and America, with admiration and envy. And they warn me that to the east I should be careful; the people are rough poor and not to be trusted. And indeed as I go east each border brings me to a country with rougher roads, rustier cars, more hardscrabble farms, bigger, dirtier gypsy camps and colder, harder looks from the men gathered to drink at increasingly tough-looking bars. Serbia is no exception. Pit toilets in some gas stations and roadside vegetable vendors with onions only, stuff like that. Rural neighborhoods with tiny homes, no apparent power or automobiles, chickens and goats, and ancient men and women hacking at their gardens with oversized hoes. Of course there were other, more prosperous looking neighborhoods as well, and all kinds of cars on the road, newer ones too. But the average is tending toward Yugos and subsistence farming.

A few kilometers in I encountered a funeral en route from church to graveyard: robed Orthodox Catholic priests, candle-bearers and a large cross, followed by a horse-drawn, flower-strewn bier, followed by a hundred mourners, followed by a mile of backed-up traffic. I stopped and removed my hat as the procession went by. Didnt have the heart to take a photo.

Later I passed through a little town with a littered, crumbling center surrounded by squalor. At a long, low, two-story school the teachers were hanging out the windows smoking cigarettes, laughing at each others’ jokes with gap-toothed grins while behind them the kids partied at a full roar, food and papers flying. The next town was clean, proper, and quiet; handsome, clean-cut schoolchildren were making their way home in little happy groups.

In Bogatic (it’s unpronounceable) I met Serbs. They are crazy bastards. They look you in the eye, act tough, sneer, then turn out to be sweethearts. My search for wi-fi brought me to the Havana café and bar in a town the size of Middlebury. The owner, Bata, 50 or so, employs his sons and their friends, all around 20, to run it, and it is my new favorite place. Bata’s twin sons Milios and Marko, 16, are like grown men and we became very close friends in a very short time. At 16 in rural Serbia you can sit at a bar, drink and smoke. Ivan the bartender is a real pro: he could work a bar in NYC no problem. 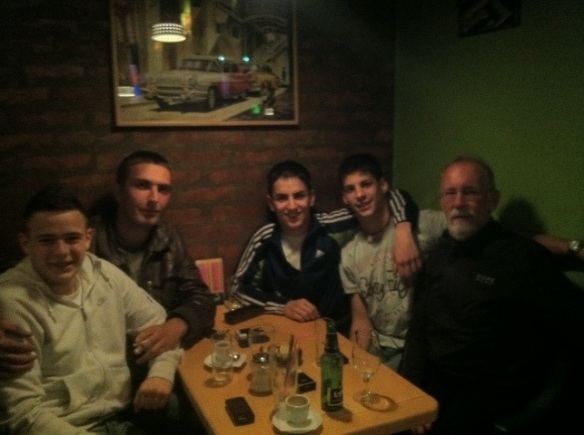 I tried to leave town but rain chased me back to the Havana. Thunder and lightning, a downpour, and sunset sent me next door to the Hotel Bogatic, where, among the old-world elegance and helpful staff, everything is broken. The price was right.

Later, back at the Havana, I joined in a mission. In an old Renault driven by Danilo (good driver), Philipe, Mladen and I went to a nearby village to meet a friend. It was a regular Chinese fire drill complete with dueling cell-phones, gas stops, and history lessons. For my part, I taught those boys that you offer an older gentleman with a white beard the front seat automatically, as a respectful gesture. They understood immediately. I like these Serbs.

What followed was a tour of most of the six bars offering live music. This is in a town of less than ten thousand. First was a small dive with a VFW feel to it, a keyboard player and a drummer backing up a fifty-year-old lady singing traditional songs. A good singer, she sat at a table with friends; I had to follow the microphone cord to find her. Next place was similar. The place after that had a three-piece band (accordion) and a young, sexy singer who went from table to table, singing with stylized flirting, looking into a man’s eyes, stroking his biceps and whatnot. After she sang to me (I promised Milos that I would post the video to Facebook, so you can see it some day if you want), I was invited to sing a couple of numbers myself. Those videos I have promised to post, too, but it was not my best performance. Alcohol was a factor. 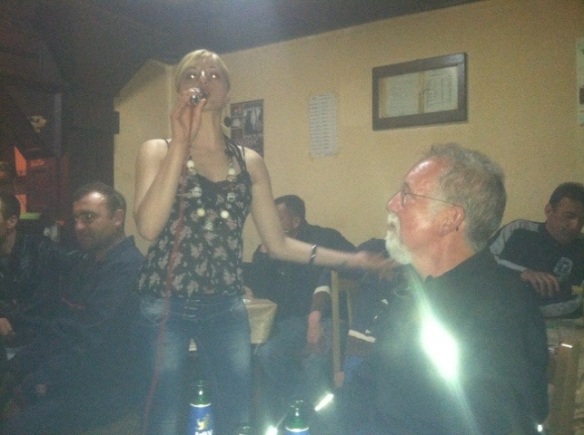 Late at night, staggering home, we traded stories. These young men are like characters in a classic tale. The twins Milos and Marko are near opposites, the straight-arrow and the long-hair, but they clearly love each other; Danilo is a bit older, wiser, experienced; Mladen is sharp, charismatic, and talented, but troubled, hurt and angry. E-mail me, dude, I have more to say to you. Philipe is the quiet one, my interpreter, a solid guy, under Mladen’s sway but his own man. He had the presence of mind to make video with my phone. Aleksandar, Nickolas, you other guys with unpronounceable names, thanks for everything. It was a great night; you are clearly the kings of Bogatic.

After a few winks in the luxury of the Hotel Bogatic, I had a breakfast date at the Havana with the twin’s parents, Bata, (his nickname) and Snezana. We had to wake the boys with the phone. These young guys; party animals but lightweights in the AM.

Goodbye turned into a show with pictures, gifts (a bottle of Rafika {plum whiskey}, a book, pens, lighters, a t-shirt, maps), extended toasts, and promises to return on my part, promises to visit me in America on their part.

Totally charged from that experience, I found myself on the road again trying to process it all and prepare for whatever was next. I navigated to the Sava River and followed its banks toward Belgrade, where it joins the Danube.

Even with the late start and slight hangover, I made 125 kilometers pass under me before taking a side road to seek a campsite. Pretty densely settled here, but agricultural and not without prospects. Still, I didn’t find anything obvious, and asked a man in a fenced-in yard if I could camp in the field across the road.

Four guys, all around fifty, were spending the weekend in a weekend house. “Stay here, it’s going to rain.” And rain it did, while we ate plentiful pork chops, salad, mushrooms, bread; great food. We made a good dent in the liter-and-a-half of plum whiskey I was carrying all day, and beer was abundant.

They Don’t Mess Around

These fellows, closer to my own age, were Serbs with very good vibes, as mellow as they come. I never learned their names. They were all scuba divers. One spoke English; he made a living filming underwater video and selling it by the second. The rest had regular jobs. They were so relaxed and matter-of-fact that I felt instantly at home (pretty easy anyway in weekend bachelor’s quarters). “Here’s a bed, there’s the bathroom, thanks for the whiskey. Want another beer?” We watched TV, they smoked cigarettes. These guys are passionate cigarette smokers.

I crashed like Evel Knievel and declined whiskey at breakfast. Departing with no fanfare (I like the coolness these guys display), I was on the road again. It was Easter Sunday for the few Roman Catholics in the area: Orthodox Catholics observe Easter next week. The coldest day in a long time, gloves and all. The rain has gone, skies are clearing. Reaching Belgrade was easy.

Belgrade is hard to describe. The city is not beautiful, but it is decent and handsome here near my hotel, across from the parliament and seat of government. The people are extraordinarily sharp and urbane. My Fedora and shades don’t fool anybody here; they look me in the face with a smirk that says, “Who are you trying to kid?” The vibe is socially aggressive and fast-paced. Everybody jaywalks; pedestrians and motorists alike claim their space and display little patience for clumsy moves by American bicyclists. Twice I saw pedestrians stop in their tracks and stare down with dagger eyes a motorist who almost failed to yield, creating an extended tense moment that onlookers seemed to enjoy.

People look you in the eye here to a remarkable degree. Not in the country but in Budapest. I look back, of course. After a few scowls and dismissive, angry, “Pfft!” sounds and eye-rolling, we can talk. When I ask, “Do you speak English?” I either get ignored after a disgusted look, or else I am impatiently told, “Of course!” as if I had insulted them. The thing is, though, after that, people are nice, helpful, friendly, downright warm. I spent the afternoon among these Belgrade Serbs and although I haven’t figured them out, I love them. They don’t hold anything back; what you see is what you get.

On the street good food comes from hole-in-the-wall sidewalk shops, very cheap, no seating or bathrooms. Next door, or not far away, you sit at a café with your food and order an overpriced soda or beer (still less than a dollar and a quarter). The café serves no food; the hole-in-the-wall food joint offers no drinks. I’m getting along fine.

That’s it for now. Tomorrow I’ll see more of Budapest and then go camping in the countryside for a few days. Next stop: Transylvania. Now a part of Romania, I hear it’s nice, thick with castles, forests, hillbillies and history. And of course I hear that the people are dangerous and rough, thieves and liars, and lazy to boot. I doubt it. Whatever I learn I will share with you here in these pages.

2 thoughts on “Into Serbia”