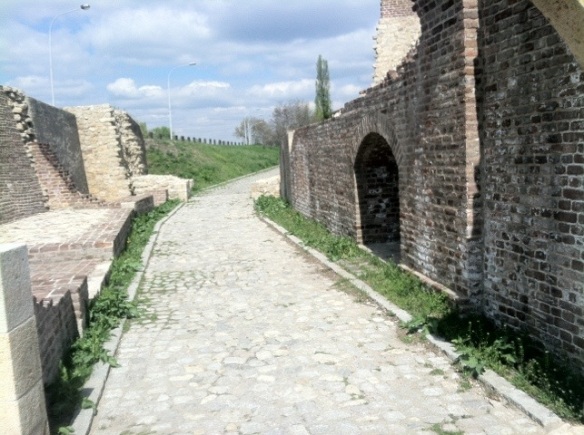 Making my way east from Belgrade was a mixed bag. With 3,000,000 people, the city spread out in a maze of highways with almost no signage. They just don’t bother with them here. Using the sun for direction was effective for the most part, but sometimes resulted in backtracking or unpleasant traffic-clogged stretches. I finally made some progress in the afternoon and reached the countryside with the typical Serbian mixture of neat, prosperous neighborhoods surrounded by squalor and litter.

Every country and village store has a table and chairs outside with men drinking beer and smoking cigarettes, some old some young, so I imagine unemployment is a factor. I was having a morning yoghurt at one such table with four men, reviewing my route map. Despite the language barrier they convinced me that my plan was unsound; they directed me to take some back roads north to the Danube and follow the big river east, a longer but nicer ride. They were so right.

The back road was 20 miles of blissfully traffic-free mountainous riding, beautiful hill farms, a couple of primitive villages and a mountain pass with dramatic views. The last mile down to the Danube was among the steepest paved roads I have bicycled.

The highway along the Danube, through a big national park, was smooth and nearly deserted. The landscape was intensely beautiful for miles and miles. Forested mountains with silver-white cliffs and outcrops plunge to both shores; the highways on both sides are engineering marvels with bridges over canyons, tunnel after tunnel, one with an old fort growing out of the top, one with just a bridge to the next tunnel. 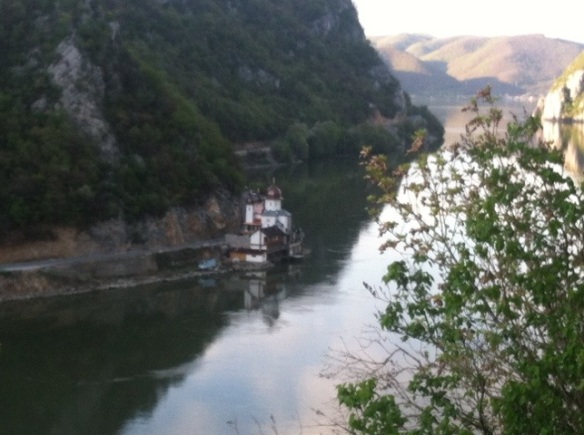 Dirt side roads led to tiny hillside sheep farms with plum trees in bloom. I stopped at one for the night, the most extreme hardscrabble farm I’ve ever visited. I had to climb a path and ford a stream to get there.

A single guy, my age, has some hilly acres, a stone and brick hovel with 2 cows and a calf downstairs, a shed with some sheep, a pig, a garden, a dog, no fowl. A large garden tiller seems to be his only equipment, an old bicycle his transportation. No English, no electricity, a stream in the yard for water. 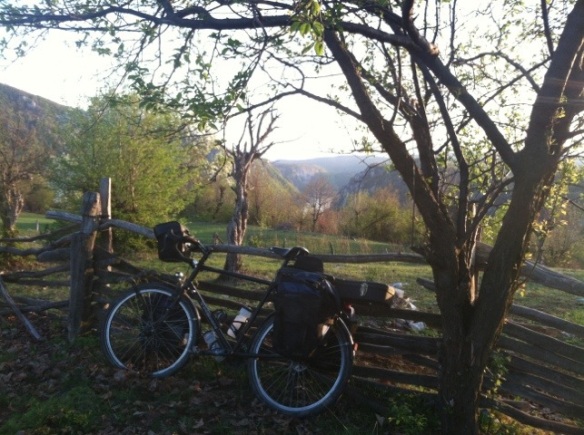 He was clearly delighted to have a guest. I was introduced to all the animals and shown the crops and plum trees, the bees and the freshly planted potato patch, although not the living space. He helped me pick a good tent spot with morning sun (that didn’t work out—it was raining in the morning). As I was cooking he brought a plate with a dripping chunk of honeycomb, the darkest I have ever had, indescribably wonderful to eat. We sat and talked for a bit, he in his language and I in mine. We laughed when we understood, laughed when we didn’t, but mostly it was quiet comments about the evening, the birds, the dog, life in general. I think we both appreciated the conversation and the absurdity. In the morning drizzle he brought me a cup of hot milk, handing it into the tent with a twinkle in his eye. He brought a watch out of his pocket and pointed to it, wagging a finger at me to bust my ass for sleeping so late.

The rain stopped and I spent an entire day following the Danube river along a couple of long curves. It’s wider than the Hudson at New York. I could see that the Romanian side had a bigger, busier highway, a railroad, more towns and more agriculture. A few barges used the waterway; no bridges or ferries crossed. Serbia is different here. Still in a big national park, I found clean roadsides, picnic tables; the towns were cared for, had welcoming riverside spaces with benches and trash bins. I found so many roadside stops with dramatic backdrops that I ate too many snacks.

Next night, my last in Serbia, was a lot like the previous one. I turned right, climbed a hell of a dirt driveway, asked permission. This farm was more prosperous, had a house, two barns, a hothouse, thirty sheep and three cows, many fowl, and a view of the Danube. Like other Serbian farmers, this fellow approached me warily, greeted me gruffly, shook hands in a businesslike manner, quickly dismissed any notion of English, and considered my request thoughtfully (I can say ‘sleep’ and ‘tent’ in Serbian), then, removing a hat and rubbing his face, as if to say, “Woah, man, this is serious!”, he looked around, thinking. Then, “Da.” He points, I camp.

Today I crossed into Romania, not into the area known as Transylvania, as I had planned, but farther south. I could see the Carpathian Mountains to the north, fresh snow at the tops; they are Transylvania’s southern border. I could visit, at the cost of some hundred and fifty mountain miles, but I won’t. It’s nearly 200 miles to Bucharest as it is. I can likely find enough adventure between here and there anyway, if not enough wi-fi.

“Here” for tonight is a big old country roadside hotel, way past it’s prime and empty but for me and a village couple drinking beer. Looks like Grandma, Grandpa and 12-year-old Bogdan run the place. Once grand, the marble floors, wood paneling, red tablecloths and chandeliers say. Outside it is grey and gloomy with overgrown trees and garden, chickens in the courtyard (one fewer now that I have dined), and no cars in the weedy parking lot. My room lacks some basics but is overly luxurious with satin bedding and private balcony, Hollywood style. Bogdan speaks a little English and nearly fainted when I handed him a tip for carrying my bags. He has never seen the Internet, even at school. His Grandma presented me with an invoice at breakfast and went over it with me in detail, explaining each charge in long bursts of Romanian, which Bogdan translated in one- or two-word phrases, just like a comedy routine.

I set off in a light drizzle and completed the climb from the Danube to Romania’s agricultural interior. In Slovenia, Croatia, Bosnia-Herzgovenia and Serbia the countryside, towns and villages were primitively and selectively developed. So far in Romania it is even less developed. In sixty miles today I passed nine villages with populations from 400 to 2000 (my guess). Only one had a tiny store with fruit, candy and soda. No bars or cafés. One gas station. Every village had a fountain, spring fed from nearby hills, where friendly townspeople were filling jugs, most on foot but some in tractors or cars. Damn little English but nice people!! No problem sharing my chocolate with little old babushkas, shooting the shit with the men, slapping five with the kids, holding the baby while mom fills the bucket. Elaborate set-up, too, with shelter from rain, benches and tables, a place to rinse mud from boots. Along the highway people wave and shout, make little bicycle motions with their fists, and wave me into the yard. At one place I stopped and was seated in a covered outdoor kitchen, fed meat and bread and served plum liquor. The family had a piece of land ten meters wide stretching from the highway back to the hills 500 meters away. So did the neighbors on both sides, dozens in the village, some bigger but not by much. Each had chickens, pigs, sheep, dogs, nice gardens, grapes, plum trees; some had cows. Women were preparing food, and very little of it looked like it came from a store. I wobbled down the highway overstuffed and a little drunk.

In the first real town, 12,000 people according to my friends, I was invited into a bar of sorts, really a comfortable living-room-like space with a modern glass-front refrigerator full of beer and soda, and a couple of arcade video games. Marcel and Cristina, an economist and lawyer couple who work and live in the city of Craiova, an hour away, keep this bar open weekends in their hometown because it is across the street from Mom’s house and they like to visit their friends. Mom fed me and sent me off with a bottle of her wine and a hat full of sweet treats. The wine is sweet and mild, low alcohol by the taste of it, refreshing after all the strong plum liquor lately.

It rained on and off today, but I still managed fifty miles in this flat, sometimes rolling terrain. Plenty of nice camping here. With a full belly I waited until late to start looking. Then I could see a serious storm coming behind me. A rough-looking bar/restaurant/truck-stop/fuel-station came into view. Very rough. I survived the dogs and the owner, who was turning sausages on a big wood-fired grill and beating the dogs with the same long fork. As soon as I got under cover the rain came in torrents. It turned out they have cheap rooms upstairs. Now I’m sitting by the radiator writing this for you while the rain continues to pour an hour later. From my window I see a few cars in the parking lot, more arriving. It’s Saturday night. I think I’ll get cleaned up and go see what’s happening downstairs at the bar.

Speaking of dogs, they are abundant and enthusiastic. They run free in bunches, no collars, or are chained in the yard inches from the road. They take their security responsibilities seriously. Three or four at once they come barking and growling, teeth bared. I haven’t been bitten but my shoes and saddlebags show scars. The Gypsy camp dogs are the worst: they don’t stop at a squirt from my water bottle, and if I’m going uphill they will chase me for half a mile.

Right this minute I’m in Craiova, Romania, in the deserted city center. Today is Easter for Orthodox Catholics, a big deal here, and all but a few businesses are closed. I found wi-fi at the closed tourism office. I’m headed off to Bucharest, then Odessa, Ukraine, just as soon as I add a few photos and upload this post.

THANKS FOR THE E-MAILS!!